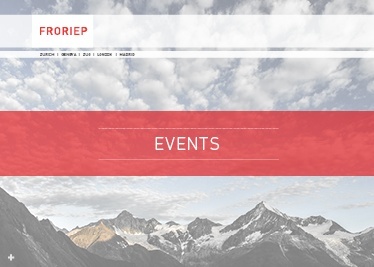 Additional posts in German and French

Blockchain for Patents - Patents for Blockchain

Much has been written and discussed about how blockchain technology would bring about fundamental changes to the financial industry which could actually threaten the very existence of banks as intermediary trust centers. At the latest after the major central banks met about a year ago in Washington at a three-day event, hosted by the World Bank, the International Monetary Fund and the US Federal Reserve, to discuss blockchain and crypto currencies, it probably dawned on a wider public that the hype around blockchain must be more than just that.

END_OF_DOCUMENT_TOKEN_TO_BE_REPLACED

Talia joined us as a trainee lawyer in March 2016. At the same time, she is working on her PhD in intellectual property at Geneva and Fribourg universities. Her Bachelor of Laws, with the bilingual distinction French–German, is from the University of Fribourg. She obtained her Master of Laws through an exchange programme at King’s College London (CTLS), and has worked as a research assistant at the University of Fribourg and as a teaching assistant at the University of Geneva. Talia’s mother tongues are French and Hebrew. She is fluent in English, German, Swiss-German and Spanish, and is learning Russian and Swedish.

In a society where the origin of products is decisive, Switzerland enjoys an excellent reputation which extends far beyond its borders. For this reason, "Swiss made" is a guarantee of tradition, quality and exclusivity. It is therefore not surprising that the products associated with Switzerland possess a certain prestige and renown that directly influence the decisions of consumers.

END_OF_DOCUMENT_TOKEN_TO_BE_REPLACED Dunja Koch has expertise in all aspects of corporate and finance law, advising mainly UK and US clients with regard to Switzerland. She is the managing partner of the London office. She joined the firm in 1998 and became a partner in 2003. She regularly works on corporate and M&A deals, as well as leveraged and acquisition finance transactions, but also project, commodity and asset finance matters, including aircraft finance. Here, she acts on behalf of aircraft manufacturers, banks and leasing companies in relation to the Swiss aspects of acquisition of aircraft and engines. Her practice further covers regulatory matters, where she advises asset managers, funds, securities dealers and other financial institutions in relation to their cross-border activities in Switzerland. The Legal 500 United Kingdom 2018 recommended her as a top foreign lawyer in London. Chambers Global (2019) ranked her as leader in the fields of Banking & Finance (Switzerland) and Banking & Finance (UK). She was also specifically recommended in the 2018 edition of the Legal 500 EMEA for Transport Law matters and named one of IFLR1000’s Women Leaders- an elite cohort of the 300 leading female transactional experts in local markets globally. She is the only practitioner from Switzerland to be featured in the guide. Dunja Koch holds a law degree from the University of Zurich and a LL.M. from Queen Mary, University of London. She qualified in Geneva in 1997 and in England and Wales in 1999. She speaks German, French, English and Italian. She is registered on the roll of attorneys in Zurich and a member of the International Bar Association (IBA), Association Suisse de Droit Aérien et Spatial and the Aviation Club of the UK.

We are pleased to announce that FRORIEP partners Nicola Benz and Frédéric Serra have been named as leading trademark lawyers in the publication "The World's Leading Trademark Professionals 2017."

END_OF_DOCUMENT_TOKEN_TO_BE_REPLACED James Merz' practice focuses on intellectual property law, IT, technology and data-protection law, unfair competition law and civil litigation in these fields. He also advises on commercial and contract law. Prior to joining Froriep in 2015, James Merz spent two years as an associate at a law firm in Zurich. He trained with the Commercial Court of the Canton of Aargau and a law firm in Zurich. James Merz graduated in law and economics from the University of St Gall in 2010 and was admitted to the Swiss Bar in 2012. In 2015 he was awarded a Master of Laws (LL.M.) in intellectual property law from the London School of Economics and Political Science (LSE). His working languages are German and English, and he has a good knowledge of French. James Merz is a member of both the Zurich and Swiss Bar associations and the Institute for the Protection of Industrial Property (INGRES).

A checklist for registering geographical names as trademarks in Switzerland

END_OF_DOCUMENT_TOKEN_TO_BE_REPLACED Nicola Benz’s practice is focused on technology and life sciences transactions. She assists technology companies of all sizes, from start-ups to established players, as well as investors, suppliers and customers across a broad range of industries and sectors. Nicola Benz’s expertise covers outsourcing, licensing, joint ventures and collaborations and associated intellectual property issues. She also has considerable experience advising on all types of commercial contracts, competition and regulatory issues and data protection. Nicola Benz is recognised as a globally leading patent and technology licensing lawyer, as well as a leading practitioner in the field of intellectual property. Chambers Europe (2018) ranked her as leader in the fields of Intellectual Property and Life Science, and she was recommended in the 2018 edition of the Legal 500 EMEA for Intellectual Property as well as TMT matters. She has also been named as a thought leader for data law in the publication "Who's Who Legal 2018". Born in Scotland, Nicola obtained her law degree from the University of Edinburgh (LLB Hons) in 1997. She joined our firm as an associate in 2002 and became a partner in 2010. Since 2017 she has been the managing partner of our firm. Her working languages are English and German. Nicola is a member of the Zurich Bar Association, the International Trademark Association (INTA), the Licensing Executives Society (LES) and the International Technology Law Association (iTechLaw).

Connect with me:
Xing LinkedIn

Panama, Its Canal and Counterfeit Trade

Panama is synonymous with its Canal and the Canal dominates much of the discussion in Panama, as I learnt at the International Trademark Association Leadership Meeting I recently attended in Panama City. One particularly interesting discussion that I participated in revolved around the trade in counterfeit goods through the Canal.

END_OF_DOCUMENT_TOKEN_TO_BE_REPLACED Founded in 1966, Froriep is one of the leading Swiss law firms.